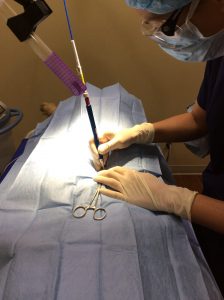 What is a laser?

LASER stands for Light Amplification by Stimulated Emission of Radiation. A laser is an optoelectronic device that produces highly concentrated light rays. Laser power may range from milliWatts (in CD-ROM drives and laser pointers) to dozens of Watts (industrial and medical applications) and over trillions of Watts (pulsed lasers in scientific and military applications).

What is laser surgery?

Interaction of laser light with tissue provides a fundamentally different approach to surgery. In laser surgery, a highly focused laser beam can efficiently ablate (either vaporize or chip away) the living tissue. At the same time, it seals (welds) capillaries, small blood vessels, lymphatics, and nerve endings, with significant benefits to both patients and surgeons. See more here on laser surgery and dental CO2 lasers.

Less Bleeding: As it cuts, the laser seals small blood vessels. This drastic reduction in bleeding enables many new surgical procedures that are not practical with conventional scalpel.

Reduced risk of infection: This is one of the unique features of the CO2 laser beam. It efficiently kills bacteria in its path, producing a sterilizing effect.