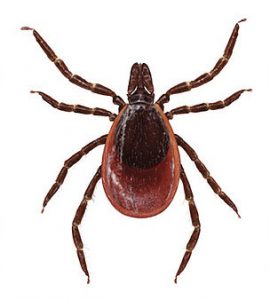 Many people think that ticks can only affect humans, but, in fact, dogs are more commonly used as a host than humans. Not only can ticks be shocking and disturbing to find feeding on your pet, but they can also pass serious diseases.

Here at Prairie View Animal Hospital we use the 4dx test to screen our dogs annually for an immune respose to three common tick-bourne diseases, lyme, ehrlichia, and anaplasma. Unfortunately, all three diseases have been diagnosed in patients in our hospital just this year.

Lyme disease is a bacterial infection that can affect humans, mammals, and birds. It is spread mainly through the bite of a deer tick.

The most common symptom of lyme disease in dogs is lameness. In some cases the infection may cause a fever, joint swelling, kidney damage and neurological issues. Your pet may have an increase in thirst, an increase in urination, lethargy, and stiffness.

Your pet may start showing symptoms 2 to 5 months after the tick has transmitted the bacterial disease. In house laboratory tests such as the 4dx will help screen for lyme disease even if your pet is not showing any clinical signs. Additional diagnostic testing, such as a urine sample and additional bloodwork, may be necessary to help diagnose the disease.

Lyme disease is treatable, but the organism can be difficult to fully eliminate from the dog’s body. Treatment consists of a four-week course of antibiotics to clear the organism. However, if unsuccessful, the organism can cause lifelong disease and permanent damage to your dog’s body and lead to a recurrence of symptoms.

Your first step in preventing your pet from getting lyme disease is to prevent the tick from spreading the disease to your pet. A good-quality flea and tick prevention is paramount in the prevention of the disease. Choose a product that repels ticks or kills the tick quickly. Even with preventatives, ticks may still attach. Thoroughly inspect your dog’s haircoat daily and physically remove any tick that you find on your pet.

The second step is a vaccine, which we offer here at Prairie View Animal hospital. This vaccine is considered a lifestyle vaccine, which is recommended for pets that spend a good amount of time outdoors or travel to grassy or wooded areas. Your dog should be tested for lyme disease before starting the vaccine.

Can I get lyme disease from my dog?

Lyme disease is not considered a zoonotic disease, meaning it cannot be spread directly from pet to human, but pets may bring unknown attached ticks into your household. This allows the tick to have the opportunity to crawl off your pet and onto you, putting you at risk for contracting lyme disease from the tick.

Ehlichiosis is a rickettsial disease spread mainly through the bite of the lone star tick. The disease effects dogs and humans.

Some acute nonspecific symptoms include fever, lethargy, decreased appetite, enlarged lymph nodes, lethargy, evidence of bleeding, and lameness. Chronic symptoms are similar to the acute symptoms for ehrlichia, just usually more severe and are accompanied by a few other symptoms including weight loss, swelling of the joints, and weakness. Your pet may start showing acute symptoms 1 to 3 weeks after being infected with canine granulocytic ehrlichiosis. However, clinical symptoms may take months to a year to show. Some pets may never develop symptoms after exposure to the disease.

The presence of symptoms may be the only means of diagnosing the disease. Bloodwork and a 4dx test are also used to a get a more accurate diagnosis. If caught in its early stages, the prognosis of this infection is good. If caught too late it can be life threatening or cause persistent infection despite treatment.

Treatment for ehrlichiosis is similar to that for lyme disease. Many pets clear the infection without treatment and with no prolonged effects. However, subsequent annual 4dx tests may continue to be positive, which indicates exposure, but not necessarily active disease.

Unfortunately there is no proven vaccine to prevent ehrlichiosis. This makes your monthly flea and tick even more important.

Anaplasma is also a rickettsial disease, similar to ehrlichiosis.

Signs of a possible anaplasmosis infection include lethargy, lameness, neck pain, bruising of gums and belly, and neurological symptoms. The majority of pets may show no symptoms, whereas some pets may show symptoms for one to seven days. The most frequently seen signs that would alert you as an owner would be lameness and stiffness of joints.

Similar to Lyme and Ehrlichiosis, the presence of symptoms may be the only means of diagnosing the disease. Bloodwork and a 4dx test are also used to a get a more accurate diagnosis. If caught in its early stages, the prognosis of this infection is good.

Treatment for anaplasma is similar for that for the other two tick-borne diseases mentioned. Many pets clear the infection without treatment and with no prolonged effects. However, subsequent annual 4dx tests may continue to be positive, which indicates exposure, but not necessarily active disease.

Prevention:
Like ehrlichia there is no vaccine to prevent anaplasmosis in your pet so it is recommend to keep current with your flea and tick preventive.

If during your tick checks you find a tick, don’t hesitate to call us here at Prairie View Animal Hospital with any questions. You are more than welcome to bring your pet in if you would like assistance in removing a tick that is attached to your pet.

The Center for Disease Control and Prevention has outlined the steps to remove a tick from your pet. Please visit this website http://www.cdc.gov/ticks/removing_a_tick.html