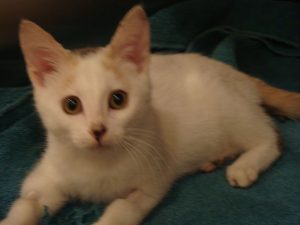 Meet Cricket. She was a stray kitten brought to us by a wonderful family after being found in a wheel well the night before. At a mere 2 pounds, she was a patient in immediate distress. She wasn’t moving, she had labored breathing, she was severely dehydrated, her gums were pale, and her stomach was severely distended. Her blood glucose was so low that it did not register on the monitor. Her body temperature was also dangerously low. Things were looking dire for this baby. However, thanks to a good samaritan, and Hope Animal Rescue, she had a fighting chance.

When this kitten walked in our door, wrapped in layers of blankets, our team stepped in immediately. We administered life-saving dextrose (sugar) directly into her bloodstream, placed an intravenous catheter to start supportive fluids, and obtained an xray of her abdomen. 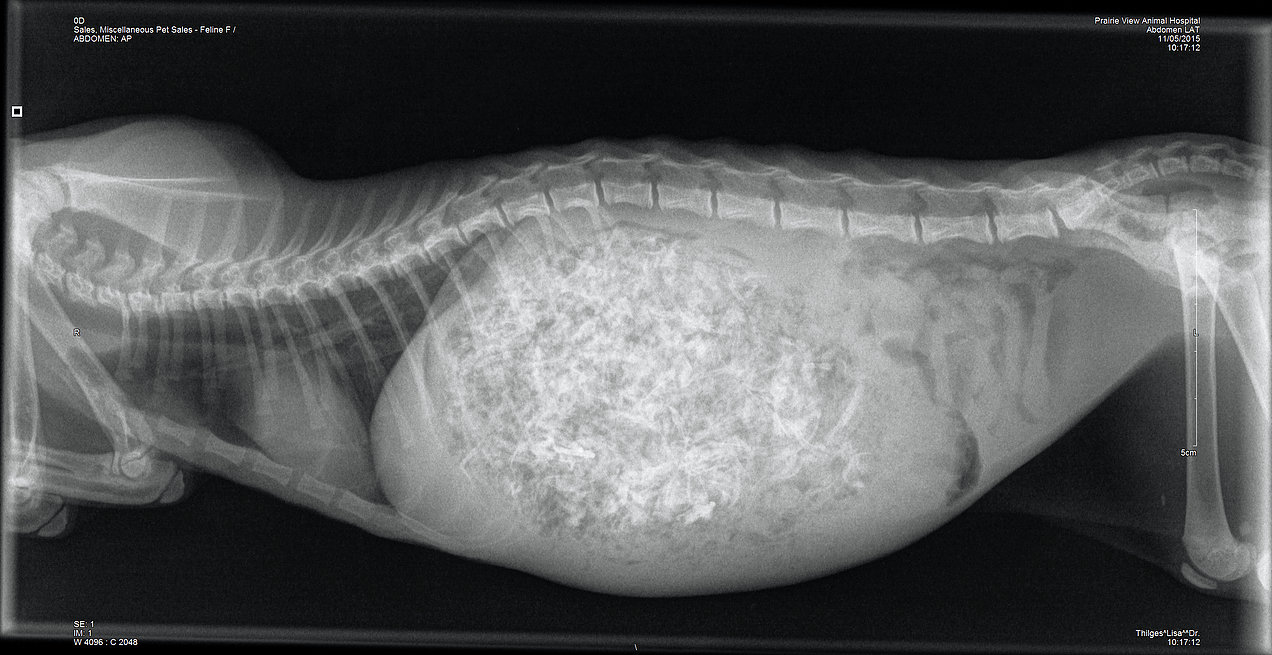 On her xray, it was seen that her stomach was extremely full of mineralized material, which Dr. Thilges believed to be some sort of prey (bird, rodent) that she engorged on a day or two before. She was likely so hungry that she ate whatever she could find. Unfortunately, this large meal was difficult for her to pass through her stomach, leaving her dehydrated and unable to maintain her blood sugar.

She was too unstable for surgical removal of the foreign material, so the only thing that we could do for her was to support her small, weak body, and wait to see if she could pass or digest the material in her stomach. The first 48 hours were rocky. Her blood sugar continued to dip down to dangerous levels. She wasn’t eating, and she couldn’t keep her body temperature at normal levels. However, she was comfortable and slowly improving. Our staff worked around the clock, coming in after-hours in order to bottle-feed her, monitor her temperature, and administer dextrose as needed. We started oral medication to help draw fluid into her GI tract.

Finally, after 3 days of intensive care, things started to turn around. She began drinking milk replacer from the syringe and maintaining her sugar and temperature. She became more alert and active. Best of all, she started to pass large amounts of foreign material, mostly hair and roundworms, in her stool. By day 5, her IV catheter was removed and she was eating frequent meals on her own from a bowl. An xray on day 10 showed that her stomach was almost empty of the foreign material.

Today, Dr. Thilges gave her the ok to be placed into foster care with Hope Animal Rescue. She has become more playful and is finally acting like a normal kitten. She is eating well and is gaining several ounces daily. We wish her the best of luck in her new life. We especially thank the good samaritan for bringing her in. Without their dedication to helping those who can’t help themselves, she never would have survived another night.

This is why we do what we do!